A Glass of Wine and Plenty of Sunshine 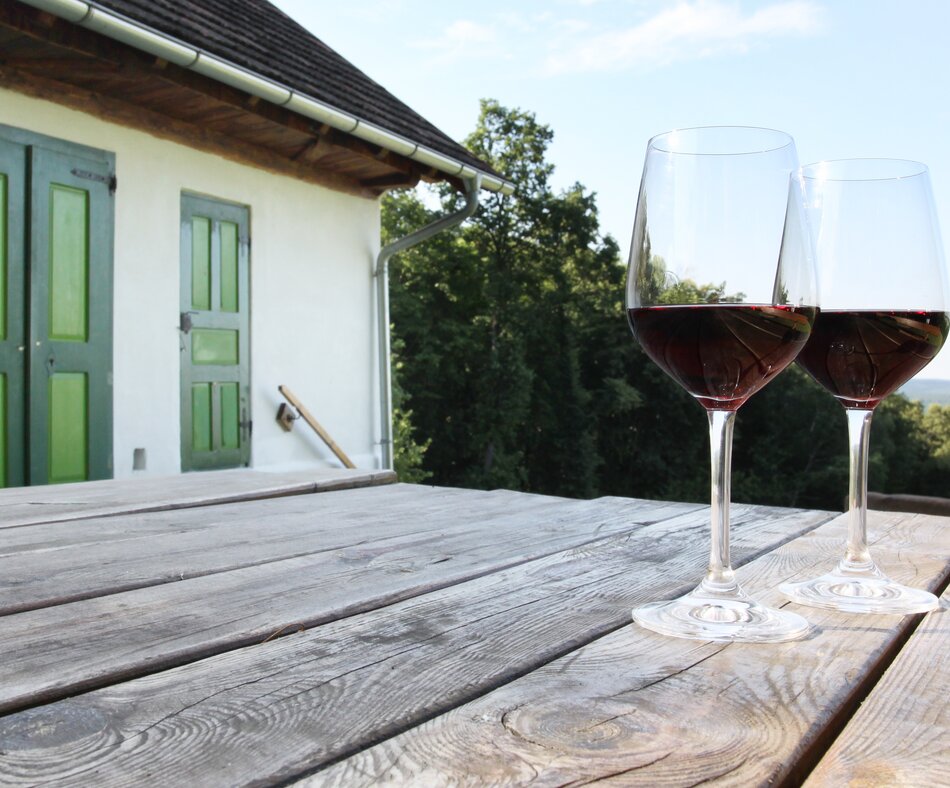 Hidden behind a little forest, right at the top of the hills of Southern Burgenland, you can find the Weinek family's Uhudler grapes growing on the hillsides. On a vineyard stay in Southern Burgenland, you'll get to taste a glass of lovely Uhudler wine - the most typical drink in this region. More than that, the wonderful experience of staying overnight in a "Kellerstöckel" is unforgettable. A "Kellerstöckel" is a traditional building set in the vineyards that was formerly used for pressing and storing wine. Let's not forget the tasty "Brettljause", a hearty snack platter. For Eva and Martin Weinek from Hagensdorf, indulgence is of utmost importance. They want their guests to enjoy a wine escape in all its glory and to sample delicious treats. More than 30 years ago, they discovered their own love for Southern Burgenland. Around 15 years ago, they decided to make the region their permanent home. It was a lovely "Kellerstöckl" in the middle of the vineyards in Heiligenbrunn that first brought them to this picturesque location.

Today, Eva and Martin live in Hagendorf, Southern Burgenland, together with their children. In this small village, they have restored an old farmhouse. The municipality is home to the famous Uhudler wine which is characteristic of Southern Burgenland. The other wines of the Weinek family are also produced here. A beautiful courtyard invites you to relax and while away the hours in the shade of the large grapevine leaves. Here, at the winery, right above the tasting room, you can spend the night in one of the two wine lodges. Enjoy Eva and Martin's hospitality.

Those who prefer to keep to themselves and enjoy nature will enjoy staying in one of the Weinek family's two "Kellerstöckel". The former wine cellars have been transformed into lovely holiday homes. All while incorporating the traditional style, the apartments come with modern furnishings and amenities.

A large number of "Kellerstöckl" are heritage listed. This is why every effort is made to stay true to the original style when renovating them. Many of them still have thatched roofs instead of tiled or wooden shingle roofs. In the cellar of the "Kellerstöckl", the winemaker's wine barrels were, or in some cases still are, stored. On the first floor, you could find the pressing room and all the other devices required to process the wine. Tired farmers could get a restful night's sleep in a small room on the first floor. Today, the "Kellerstöckl" have been restored. The first floor is now a holiday apartment that sleeps 2 to 6 people. The location of these historic buildings is extraordinary! There hardly is a more idyllic place for a holiday. Stay right in the middle of a vineyard. Recently, the Weinek family's second "Kellerstöckl" ("Kellerstöckl am Kulmer Weinberg") has also been converted into a holiday home. It's situated right next to the family's own wine tavern. That comes in handy! Right next door, you can taste as many of their wines as you like and eat your fill without having to drive back to your apartment afterwards.

At the Weinek family's traditional wine tavern, you can enjoy cold snacks such as bacon, home-made spreads, "Kümmelbraten" (roast pork with caraway seeds), pickled vegetables and runner beans. There are also warm dishes on the menu. Try "Glaslfleisch" (bottled meat), home-made sausage from free-range oxen and freshly baked bread with smoked trout. The region's cultural and culinary heritage is very important to the family. Eva and Martin produce a lot of the meals and side dishes themselves including smoked ham. Eva loves pickling vegetables from their own garden. We helped her harvest cucumbers to make mustard pickles. They are served with a hearty snack platter. Eva even puts together the herb salt which is used in all of the dishes.

The family is passionate about preserving the Uhudler grape. This grape variety is strongly connected with the region's history. It’s a delicacy to be found only here. The Uhudler is a so-called direct carrier or hybrid grape. This means that the variety is not grafted onto another rootstocks. It grows on its own roots. This makes it highly resistant to diseases. After the phylloxera plague in the 1860s, it was imported from North America. As a result, Uhudler has an excellent tolerance to mildew and other fungal diseases. It hardly ever needs to be treated. Where does the Uhudler wine get its name from? It's actually derived from the women who pressed the wine. After consuming excessive amounts of the drink, the look on their faces resembled an eagle-owl. And an eagle-owl is called "Uhu" in German.

Initially prohibited, Uhudler wine was approved by Austrian Wine Act in 1992. Since that time, it has been permitted for sale in 26 municipalities in Southern Burgenland. However, the most common grape varieties of Uhudler grapes such as Ripatella, Concordia, Elvira and Delaware are officially forbidden according to EU wine regulations. However, an ordinance by the regional government of Burgenland amending the Wine Growing Ordinance allows winegrowers to produce these varieties until the end of 2030. They cannot be declared as "quality wines". In 2016, the status of the Uhudler wine has been secured under the classification of "fruit wine". This decision was a great relief for the winemakers who have been fighting for preserving the Uhudler grape for many years. An association called "Friends of Uhudler" ("Freunde des Uhudler" in German) has made a significant contribution to the protection of this heritage grape variety. By means of education and monitoring, its members have managed to improve the quality of the Uhudler wine. Tasting sessions and quality tests are conducted every year. The wines have to meet certain criteria regarding typicity, purity and clarity. Only wines that have passed these tests may carry the name "Uhudler" and the association's label.

The strong rosé colour of the Uhudler wine comes from the blend of red and white Uhudler grapes. The variety produces wine that smells intensively of wild strawberries. It's taste reminds of forest fruit, raspberries, blackcurrant. The most typical trait is its "foxy" nature. You absolutely need to try it! It's great to see the diversity of Burgenland. Honestly, the "Kellerstöckl" really are something special. It would be great to have something similar in Northern Burgenland as well. But it's these traditional heritage buildings and the typical Uhudler wine which makes a holiday in Southern Burgenland so special. They are part of the region's cultural heritage. I can absolutely recommend a vineyard stay for all those who value authenticity, nature-oriented tourism, traditions and culture. But it's also a delight for anyone who cares about quality wines, culinary delights and relaxation.

Many thanks to Eva and Martin for their friendly hospitality and the opportunity to see you at work.

When You Need to Go Up to Wind Down

#OurHoliday: In the Realm of the Golden Eagle